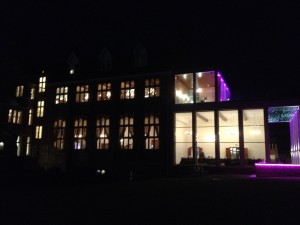 Stanbrook Abbey was completely unknown to us and, arriving in the evening, our first impression was of light in the rural darkness. Lights dotted the turning driveway that introduced the 22 acres of carefully tended gardens and we swept past the abbey to the car park. A funky purple-pink glow outlined the modern glass and stone extension, which contrasts sharply against the original red brick building. Naturally the red carpet awaited and we were warmly greeted and shown to the second-floor restaurant. 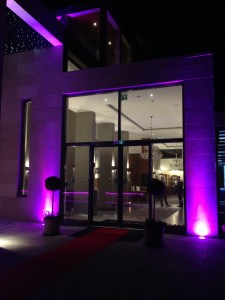 Sister Charlotte’s is the fine dining room, one of a selection of dining options at the hotel. Its name seemed to reflect the lifestyle of the Benedictine nuns who were the silent residents until 2009. Only later did we learn that the restaurant is named after the recently-born Princess Charlotte, to compliment the Georges Bar downstairs.

The room itself is large enough to be impressive, with

a high ceiling and stunning views (though not in the dark!). It retains an intimate atmosphere, enhanced by good company and music for the occasion. Together with local residents and dignitaries, our party was treated to the best of local food, prepared as bowl food canapés and of course, plenty of celebratory champagne. 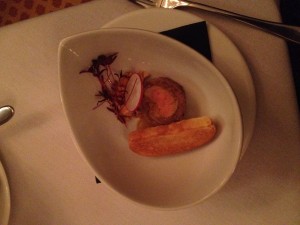 met the brief of providing seasonally changing, delicious contemporary food. I was particularly impressed by goats cheese cheesecake, served as an aperitif – original and delicious. We sampled several dishes from three courses of the menu, each treated with delicacy, as befits fine ingredients. Nevertheless, robust flavours came through and a particular delight was the gnocchi. Our companion was treated to vegan variations on the theme without demur and very little delay.

After eating, a much-anticipated guided tour took place, under the guidance of 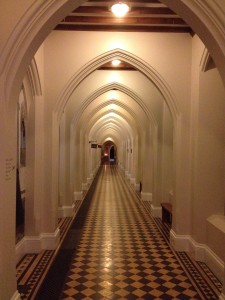 Stanbrook’s historian, Chris. The conversion of a gothic building containing nun’s cells and Pugin’s masterpiece religious buildings and tower has been a triumph. The religious history of the building is evident and indeed cherished and respected. Former cloisters form covered walkways around the extensive buildings. There are fourteen function rooms and several, including the original chapel, are licenced for weddings.

As we progressed around the hotel, Chris pointed out and explained the architectural and decorative features. Original encaustic tiles represented the coats of arms of the nuns, many of them from important families.

A sense of fun at Stanbrook

The designers have been responsible for injecting humorous touches to remove any possibility of the hotel seeming sombre. There was the Nun’s Washroom sign on the 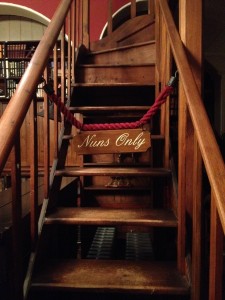 door of the ladies’ bathroom and part of the library was tactfully marked “nun’s only”, presumably to avoid damaging the original staircase. We spotted lines from The Eagles, Hotel California sign written on the walls in places. But after all, in such a lovely place who would want to leave?

Such an extensive hotel has many public rooms, including a range in the cellars. This allows them to provide slightly quirky wedding facilities, such as a ‘groom’s room’ with masculine déc

or, pool table and private bar. Chris explained that the original exit to this room is kept locked ‘to prevent the groom from escaping’! I could imagine weddings on a grand scale, or an intimate ceremony and there wouldn’t be a lack of accommodation for guests.

The chapel itself remains much as it would have been while the nuns were in residence, though it has been de-consecrated and had to be licenced to hold weddings.

We were treated to an unscheduled tour of some of the guests rooms and suites. The

luxurious ensuites and linens would have been unfamiliar to the original residents but the interior decor carefully echoes the architecture of the building in its arched headboards and neutral palette. Stanbrook’s trademark purple highlights add a touch of contrast in the opulent surroundings.

We stopped off for a coffee in the Georges Bar, decorated in a very un-masculine pink with photos of famous Georges around the walls. The game is to guess the names of each George, including Charlotte’s royal brother, naturally. As we relaxed, the staff were restoring order after the PR launch. Service was professional and warm, with a smile for each guest.

Whatever the reason for visiting Stanbrook Abbey, guests will be spoilt for choice. There’s scope for every possible kind of celebration and corporate event or just a special afternoon tea for two. Stanbrook and Journey organised a PR launch for Sister Charlotte’s that exceeded all my expectations and I don’t doubt that I will be back.

I very much enjoyed working with Sue Kelso Ryan while she was writing copy for a new website and I’m delighted with the end result! … I would highly recommend Sue and indeed, I hope to work with her on further projects in the future.

In the Blink of an Eye, with Mia Austin

I’m pleased to share the cover of my recent ghostwriting collaboration with Mia Austin, a book telling the story of the young woman’s new life with locked-in syndrome. Available on Amazon in paperback and e-book. 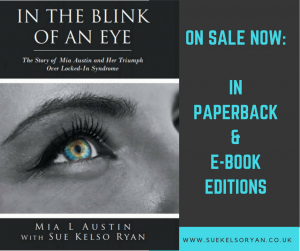 Cheltenham based freelance editor and writer with a passion for genealogy & a mad cocker spaniel.

The first snowdrops. Will there be snow to follow?

I ❤️ the #silhouette of this tree. It’s a fa

No trespassers! Despite the two padlocks, this gat

Return to the Green Dragon. They used to say that

Special treat for tea today, thanks to @kirillovel

Tomte can’t wait to light some fires and get cre